Stay up to date!

With all the latest Orlando Events... 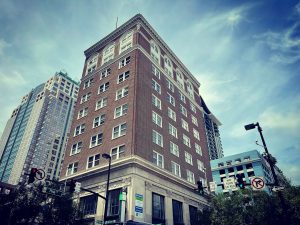 A tour of historic downtown Orlando is always a fun way to spend a lazy weekend. This episode features a tour of Church Street Station, the H.S. Kress Building, the Metcalf Building, the Angebuilt Hotel, the Rogers Building and the Cherry Plaza Hotel which is now an apartment building.

While my city may not have the tallest buildings or the storied avenues like New York, Toronto or Miami; Downtown Orlando, Florida still maintains a great number of the original buildings from its earliest days as a cattle and citrus town. They may not be grandiose, but they are every bit as historic, and each has a story to tell about the city beautiful.

While my city may not have the tallest buildings or the storied avenues like New York, Toronto or Miami; Downtown Orlando, Florida still maintains a great number of the original buildings from its earliest days as a cattle and citrus town. They may not be grandiose, but they are every bit as historic, and each has a story to tell about the city beautiful. Let me guide you around historic downtown Orlando, Florida. Coming up next.

First up on our tour is the historic Church Street Station, also known as the Old Orlando Railroad Depot. In October of 1880, the South Florida Railroad arrived in Orlando from Sanford about 23 miles north. The very first depot was an old wooden building, located at 4 Depot Place and West Church Street, constructed across from Bumby Hardware and Feed Store. Joseph Bumby, one of Orlando’s prominent businessmen, was the first station master and freight agent. You can learn more about him in my History of Orlando Series. In 1886, famed railroad magnate Henry Plant built a new Victorian-style depo which was dedicated in 1889 and which still stands in Downtown Orlando today. This depot was a symbolic step that Orlando was growing as one of Florida’s major cities.

The story goes, that on the inaugural trip from Sanford, the South Florida Railroad mounted a canon on the rear of the train and fired it off all the way down the line in a boisterous celebration of its arrival into Orlando.
Church Street Station continued to function as a ticket outlet, but by the 1970s, it had largely been abandoned. The station was added to the U.S. National Register of Historic Places in 1976.

In 2005, local restaurateurs signed a lease for the building but backed out claiming the building was haunted. In fact, a letter from their lawyer alleged construction workers had seen ghosts which the owners had failed to inform them. The landlord offered to have an exorcism performed and sued stating there were no ghosts in, on, above, below, or around the building. A ghost tour operator: however, asserted the building was haunted by the ghosts of children of prostitutes who worked in the Strand Hotel upstairs which had been a de facto brothel.

Today the depot serves as a platform for the SunRail Commuter train through Orlando, and there are rumors of plans for large scale redevelopment.

Next on our tour of historic downtown Orlando, we’ll walk not too far up Church Street to visit a true American Icon: The S. H. Kress Building.

S. H. Kress & Co. was a chain of “five and dime” retail department stores in the United States operating from 1896 to 1981. The creation of an architectural division within the company played a key role in both attracting customers and facilitating sales. Envisioning his stores as works of public art, Samuel H. Kress wanted his stores to contribute positively to the cityscape. From elaborate Gothic Revival to streamlined Art Deco, Kress stores were designed to be integral parts of their business districts and helped define Main Street America.

Orlando’s Kress building is one of the very few true Art Deco structures in the city. As one of Orlando’s finest period structures, this 1936 Art Deco building features multi-colored terra cotta including orange, green, yellow and off-white, best noted above the windows. Take a close look at these intricate details and you will find stylized parrots. You’ll see that some are flying up and some are flying down. Today the building serves as offices on the upper floors and is home to the Kress Chophouse restaurant. As one of the country’s best-preserved examples of mid-twentieth century architecture, the Orlando Kress building is truly a national landmark.

I must confess; this next building on our tour of historic downtown Orlando is my absolute favorite of all. This Chicago-style brick building located at 100 South Orange Avenue and Pine Street in the heart of downtown was once owned by the Orlando Bank and Trust and opened in 1924. It was only the third high-rise building built in downtown and in 1936 this 10-story gem became known as the Metcalf Building when real estate investor Henry Metcalf purchased it for only $125,000, less than half the current median price for a home in the Orlando today.

This Historic building is one of exceptional importance to the shaping of the City of Orlando. In addition to being one of the first high rise buildings in the city, the Metcalf Building was once home to The Walt Disney Company who occupied the top floor when Disney was planning the Reedy Creek Improvement District which became Walt Disney World.

Today the building, which was recently purchased for nearly 10 million dollars is home to professional offices and the famous Tanqueray’s basement bar which has resided in the building for over 30 years.
When visiting downtown Orlando, take a moment to admire this magnificent historic building.

Another true gem set in the heart of historic downtown Orlando is up next on our tour. Located on the northeast corner of Wall Street and Orange Avenue the grand Angebilt Hotel was once the tallest building in downtown. Designed by Murry S. King, Florida’s first registered architect and modeled after the Hotel Pennsylvania in New York City, the Angebuilt Hotel was the dream of Joseph Fenner Ange built at a staggering cost of 1.1 million dollars (remember this was the early 1920s). The hotel opened on March 14, 1923, with 250 rooms on 11 floors including a roof-top sky deck providing unparalleled views of Lake Eola and the downtown area. Just prior to opening, on March 1, 1923, Harry Gardiner, also known as “The Human Fly,” scaled the Angebilt to raise publicity and funds for the Elks Club. Across the street the San Juan Hotel hurriedly built an 8-story addition to their property just so they could claim to be the best hotel in Orlando. The rivalry between the San Juan Hotel and the Angebilt Hotel lasted for 52 years. The hotel managed to survive through bankruptcy, several owners, the great depression, natural disasters and fires.
Unlike the neighboring San Juan Hotel, the Angebilt managed to escape demolition and survives to this day due to the creation of the Downtown Orlando Historic District and the Orlando Historic Preservation Board. Today, the Angebilt is now offices with bars and retail on the ground floor. The Angebuilt Hotel remains standing as a reminder of Orlando’s past.

I’ll finish up our tour of historic downtown Orlando with two quick stops. If you’re looking for the oldest building in downtown Orlando, that honor goes to the Rogers building. Built as an English Gentlemen’s Club in the Queen Anne style in 1886. The building now houses the Downtown Arts District galleries and was placed on the National Register of Historic Places in 1983.

Finally, if you’re a lover of Disney history in Orlando, you might remember the Cherry Plaza Hotel which served as the place where Walt Disney, his brother Roy and then-governor Hayden Burns held the famous press conference announcing Walt Disney was coming to town.

Today you’ll find the building on the southeast corner of Lake Eola. The hotel has been converted into an apartment building.

There are so many stories to tell about the fascinating history of downtown Orlando. Click the link above to watch my History of Orlando Series to learn more. I hope you’ll visit some of the places I’ve taken you to in this episode, the next time you visit Orlando.